“So, Bob, Would You Hand Me That Thingamajig?” 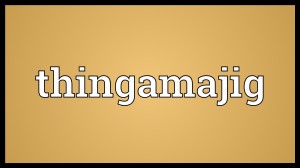 Those are, of course, all words we use to refer to things for which we are unsure of the actual word, if there is one, for the thingamajig in question.

There. I’ve written “thingamajig” twice now, and my spell-checker has thus far resisted the impulse (do spell-checkers have impulses?) to squiggle a red line under the word, thereby calling my spelling into question. “Thingamajig” is evidently now a bona fide word for something we don’t know the word for. Ditto for doohickey.

Yes, but dillybob and whatsit still get red squiggles. Since I usually write these columns using software which, perhaps like its owner, tends to straddle American and British English spelling a bit—its preference for “anesthesia” or “anaesthesia” is mostly anesthetized, not to say completely anaesthetised (red squiggle just appeared; the “s” did it)—I often double-check the spell-check.

So I just did. Now the gate arm swings up and whatsit strides on past the spell-check check point. Dillybob is still being held at the border, though the Urban Dictionary (not, I admit, the highest authority) recognizes its usefulness. The Oxford English Dictionary must be dilly-dallying and hasn’t given dillybob its official papers yet.

Still, you know what I mean when I use the word. We need words for thingamabobs, whatchamacallits, doodahs, and hoobajoobs. (Sea of red squiggles now, but I’ll stake my English degree that these whatsitsname words for things unknown or as yet unnamed exist to answer, rather creatively and with a touch of heart-tickling whimsy, a real need.) The language would be much poorer without them.

We need a word for the crunchy little tidbit left on a corn dog stick when the dog is doggone. And along that line, what about a word for that little smidge of chocolate sticking to an ice cream stick until you lick it off?

What about a word for that disgusting little puff of smelly air that hits you in the face when, after delaying a bit too long, you bag the kitchen trash and then lean over and pull the plastic drawstring tight?

Often you discover that a word really does exist for the whatsit you wondered about. It was a fine moment when author Madeleine L’Engle taught me that dragon droppings are called “fewmets.” It’s a shame to accidentally step into something and not know its official name. Now I’m fewmetically safe. (Definite red squiggle.)

And is there a one-word description for a dweeb with a weird sense of humor? I guess so. (See dweeb. Or dork. Or nerd. Maybe doofus.)

I stepped right into that one, but I’m still smiling. Words can sting a little or a lot. But they can also morph wonderfully into delightful whimsy. And they can fly to heights of breathtaking beauty and awe-inspiring mystery.

And, yes, sometimes you just need a word and don’t have one. But our heavenly Father knew exactly what this world needed when, out of infinite love, he sent us his Son, the Word.

Copyright 2018 by Curtis K. Shelburne. Permission to copy without altering text or for monetary gain is hereby granted subject to inclusion of this copyright notice.